David served in the Royal Navy for 25 years as a Marine Engineer Officer. His appointments included HMS OCEAN, the Vanguard class nuclear submarine ship lift as part of the team that commissioned and first operated it and, latterly, as the Officer in Command and Chief Engineer of HMS DARING, the RN’s most technologically advanced warship, during her build and sea trials phases.  In recognition of his leadership in this role he was awarded the OBE in the 2009 Queen’s Birthday Honours list.

On leaving the RN he was employed as the Director of UK Government Engagement for Inchcape Shipping Services, a worldwide maritime logistics company.  In 2014 he accepted an appointment as the Regional Director of the East Midlands for the Confederation of British Industry.

On 21 May 2015, ten days after his 50th birthday, he was diagnosed with Stage 4 advanced renal cancer. He was then under daily treatment with a targeted therapy tablet and received scans every 3 months.

After diagnosis David finished writing his novel, A French Affair, wrote a blog likening his cancer to a monkey on his back, gave talks about his experience with cancer and work, and founded a charity, ASTRiiD, which aims to help anyone with a chronic medical condition to find work; this is his legacy.

He taught GCSE Maths part time at Boston College and was available to give talks on how military leadership techniques can work equally well in business.

On 24 May 2018, shortly after his 53rd birthday, David succumbed to his cancers and passed away. His commitment to finding a solution to help those with chronic illness access employment opportunities was unwavering and nothing short of inspirational.

David is survived by his wife Jo and her son Zachary.

David was a firm believer in making the most of every day – especially when his number of days available was limited.

David Passed Away Today - Did The Monkey Finally Win?

David’s ashes are ‘Committed to the Deep’ 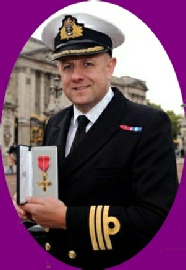